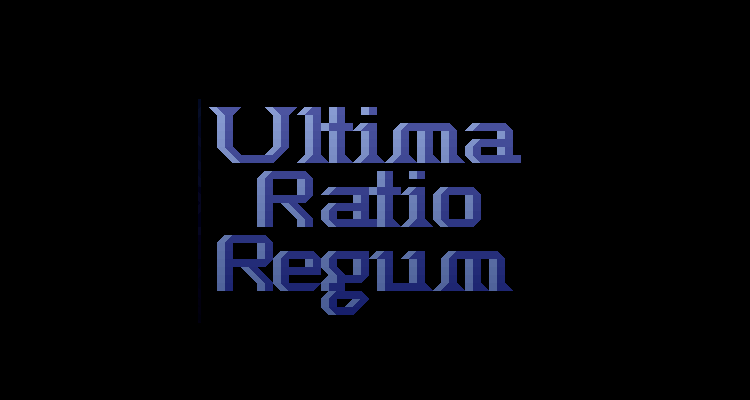 My first plan for 0.10 was procedural book generation. We already had the books generating as items and – if you’ll allow me – they’re one of the things I was proudest of in the 0.9 release: 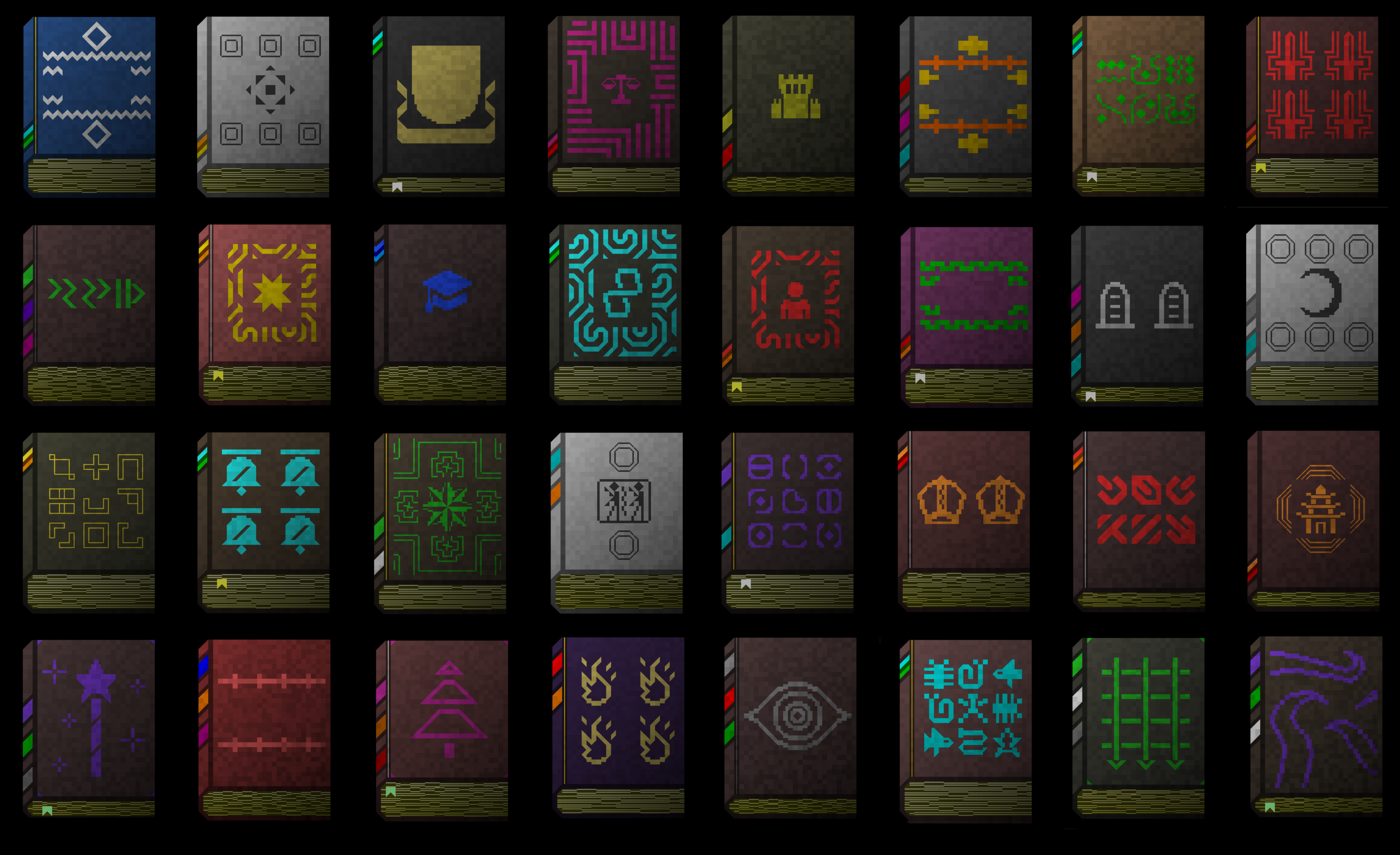 This was always intended to be a central part of the game – I want to get the game generating texts that were logical and meaningful and connected closely to the game world, and to get the player reading these as a central part of learning about the world and finding the clues to the core mystery. However, as readers will know to some extent, 2022 has not exactly been the year I was hoping it would in terms of my health, and while things might be picking up now, I often feel like I’m in a perpetual back-and-forth between “unwell” and “getting back to where I was before I got unwell again”, with little time to actually build something and build on what I’ve been doing previously. I’m now back in the “gbtwiwbigua” phase (as we call it) once more, but I don’t know what the rest of the year holds. This is important because the generation of the book contents is something I’ve made some progress on – some incredibly exciting progress, actually – but realistically there is no way I can now finish it before the end of the year. Even if I didn’t have a full-time job to consider, and even if I did literally nothing else for 0.10 except the book contents, I still don’t think I could get it finished in time. I really don’t want to half-arse the book generation as it’s something that really excites me, but I also am now determined (as discussed in past blog posts) to keep to one major release a year, no matter what.

So, instead, 0.10 is going to be the “everything I wanted to put in 0.7, 0.8 and 0.9, but didn’t have the time to” release! I’ve been making some good progress easing myself back in, building some new code and some new content, and refamiliarizing myself with everything, so here’s what has been added so far in the past couple of months:

To begin with, we have some new items! These appear in a variety of logical shops and are items that contribute to your navigation of the world and to surviving in the world (see below). The first of these is the compass, which (like everything) can be found in various qualities and various shapes depending on the civilization you buy it from. The compass reduces how much water the player consumes when moving through desert – the logic being that you can more accurately plan your movements instead of stumbling around uncertainly. The quality of the compass – low, medium, high – determines how accurate it is and thus how much water is saved, with the lowest quality saving the player 25% of their water, the medium quality saving 33%, and the highest quality saving 50%.

We also have canes! These reduce food use in all of what I’m now calling the challenging terrains – desert, polar, and mountainous – by 25%, 33%, and 50%, again depending on quality. These can be purchased at carpenters’ shops and like the pitons will eventually wear out, but only as an extremely slow pace. On a side note I have to say I’m particularly happy with the generator I built for these, as it is (un?)surprisingly difficult to think of many ways to vary and make interesting and item that is, essentially, a stick of wood. Nevertheless, I think I did pretty well here!

And, finally, we have grenades! Modelled after pre-gunpowder and early gunpowder historical grenades, these will be available in powdermaker shops in civilizations with the appropriate technologies and policies. Shown here from left to right is a hallucinogenic grenade, an explosive grenade, and a smoke grenade, and I’m working on a couple of other types as well. As I’ve said before, I really am excited about working on combat when that starts coming into play, and these are a category of item I’ve been looking forward to adding into the game for a while now.

Part of what I have planned for this release is really expanding and developing the speech options. As part of this, therefore, you can now ask NPCs open questions of the type “What do you think about [X]?”. This means you can now question NPCs about any alcoholic drink, any prisoner (if you’re talking to a jailer), any historical event, any ship (if you’re talking to a sailor), any monastery or monk (if you’re talking to monks or priests), any political party (in relevant nations), any major family (in feudal nations), any gladiator (in relevant nations), any feudal nation, any tribal nation, any nomadic nation, any known disease or plague, any religious relic, any religion, any individual, any city, any town, any area of the world map, any animal or plant, any weapon, any artwork, any book, and any political ideology. Here’s an example of these sorts of questions in the list of questions, and then an example of how it currently looks when you’re selecting what to ask: 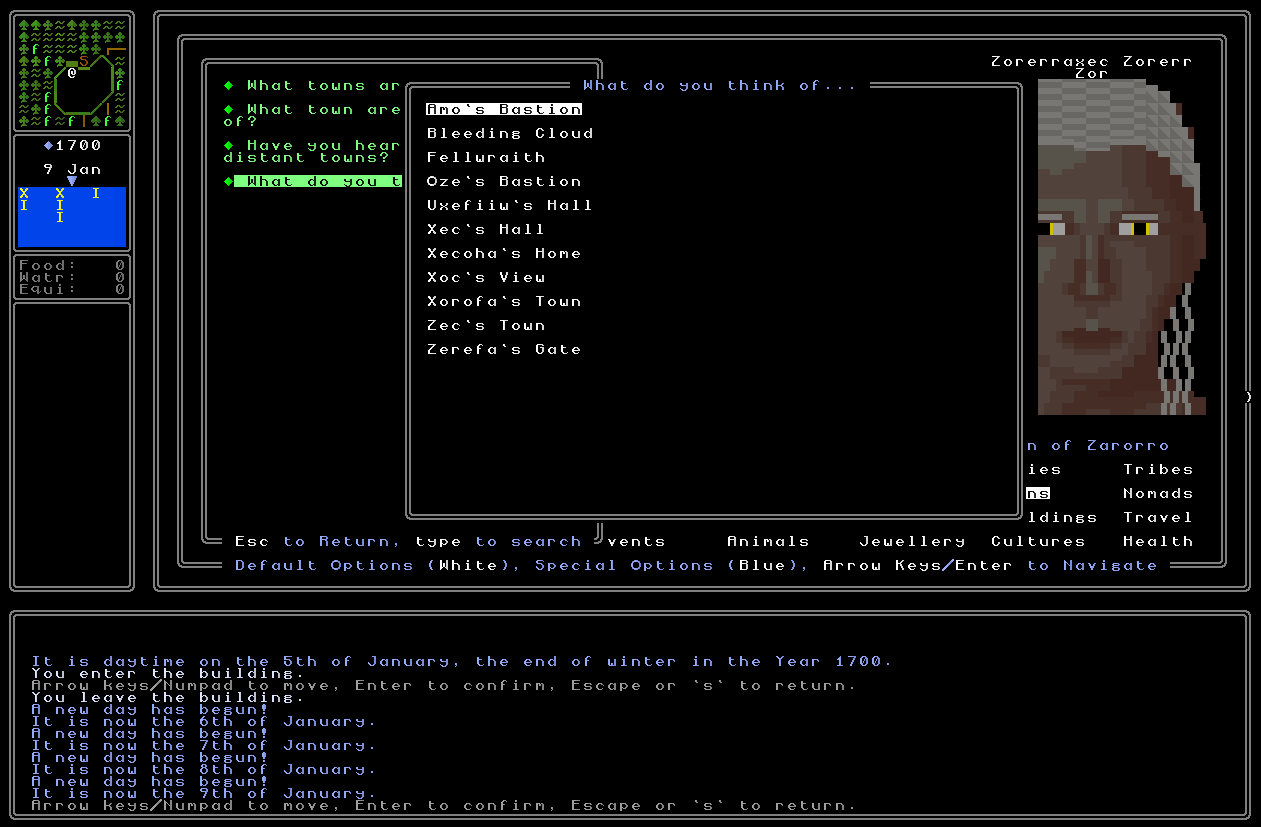 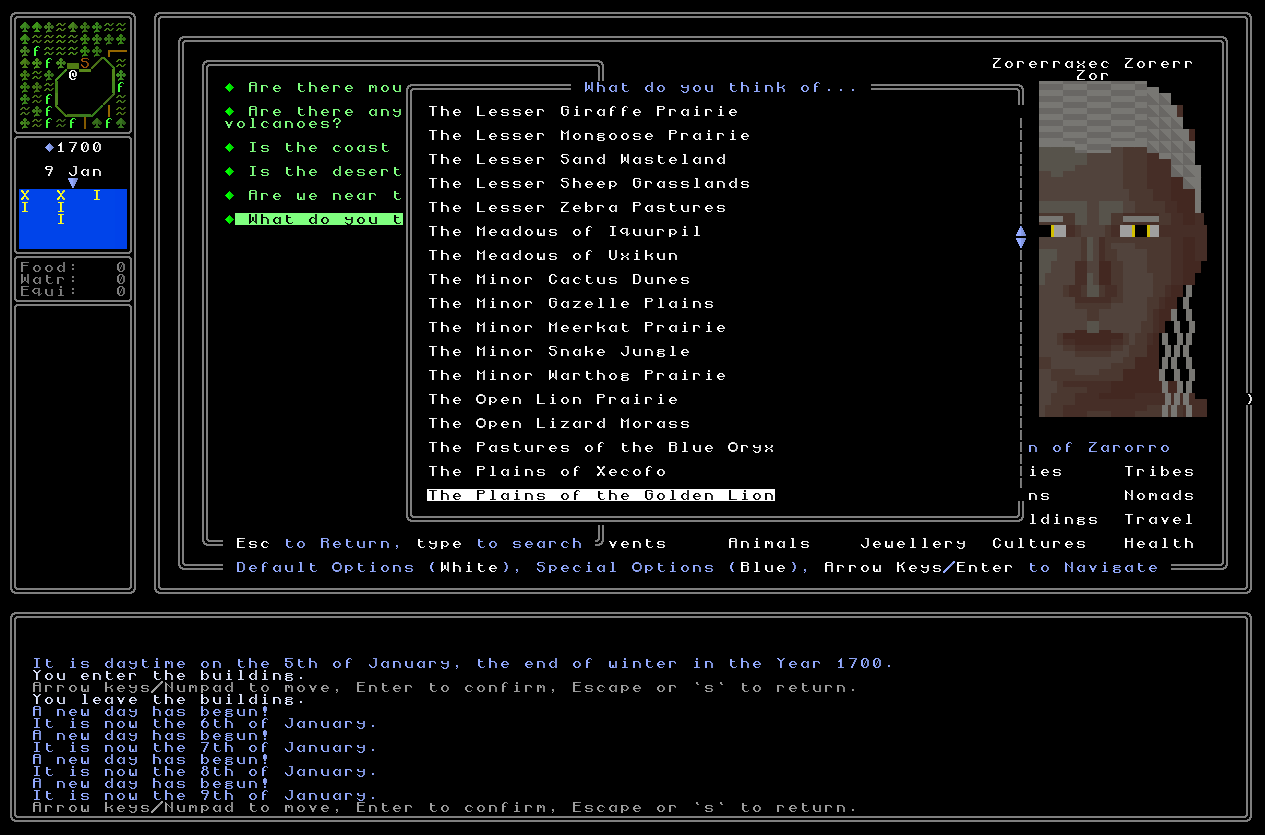 One of my next tasks, of course, will be to develop the responses to these questions! More on this soon.

I’ve always hated the minutiae and the constant need to keep yourself from dying in most “survival games” – eat food every few minutes, drink water every few minutes, etc. It’s tedious and repetitive and doesn’t really add a great deal (except in a few rare cases where it is so tightly integrated into the game design, as in something like Don’t Starve). By contrast, the survival mechanics in a game like The Curious Expedition, which was one of my favourite games from last year, struck me as very different. In moving survival from the constant to the strategic, the question in TCE is instead framed far more as “planning for an expedition” and making sure you have enough to survive, making good use of your resources, planning ahead, and so forth. These sorts of framings really attract me and really fit in with the sort of thing I’m looking to do in URR. It shouldn’t be something the player is thinking about every second of the day, but given the game’s focus on exploration and the size of the game world, I’m really attracted to the idea that in order to push out from one’s base city you need to make sure you have what you need to survive, and that to push out into more challenging terrains (desert, polar, mountains, etc) you need to ensure you’ve got what you’ll need to be able to properly explore them. 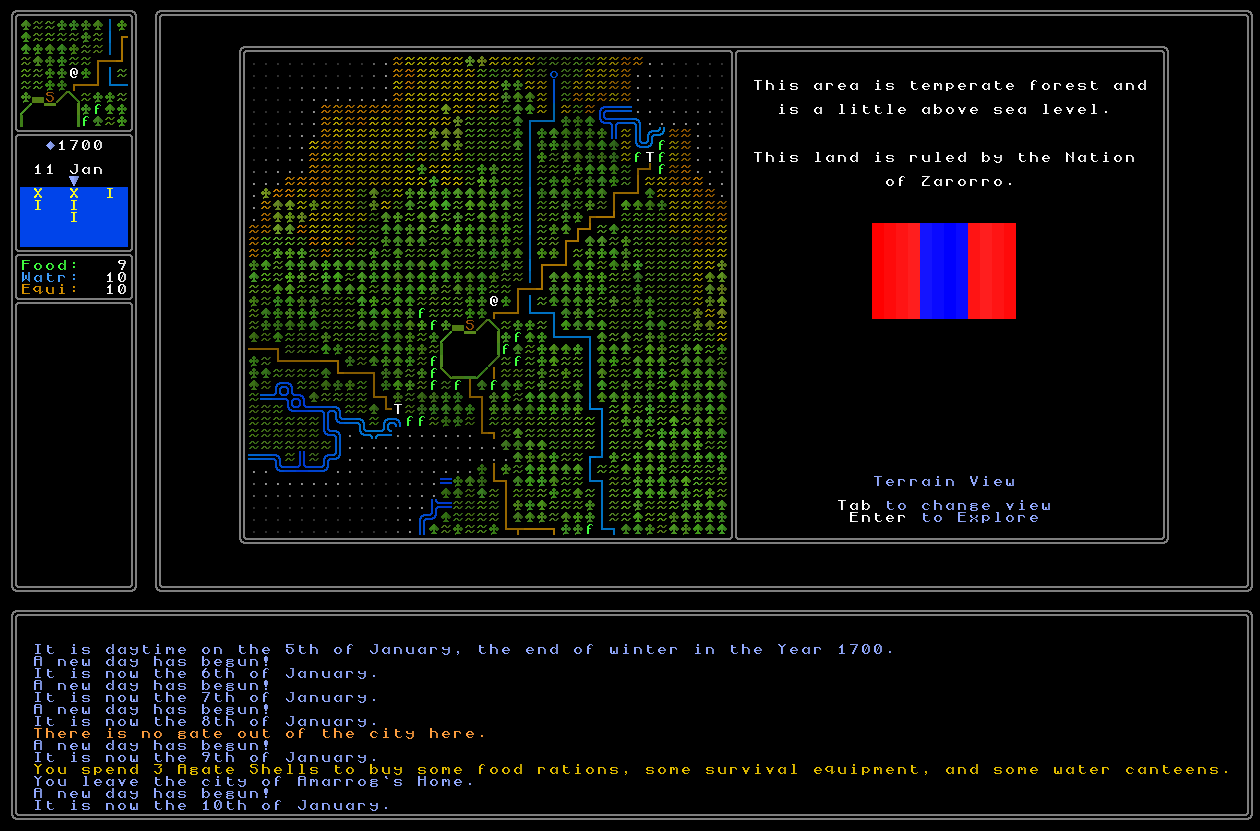 So, progress has begun on the “planning for expeditions” side of things by adding three meters into the game which you can see now on the sidebar on the left – food, water, and equipment. None of these are required in cities, towns, and on ships, but to head out yourself, you’ll need to stock up on supplies. Food is consumed each day you’re out of a settlement / ship; water is consumed each day you’re in the desert (the assumption is that outside of the desert you can find abundant water sources), and equipment is consumed each day you’re in polar or mountainous regions (again, it’s assumed this is easier elsewhere). These can be bought in cities when you enter/exit through the city gate (which is the part of this I’m now working on). These are pretty cheap goods, but naturally if one runs out and isn’t in a settlement or a ship, bad things might begin to happen – which should be pretty fun to code. More on this soon!

Thrones – despite having been generated over a year ago – now, actually, appear in-game when you look at a throne. So that’s nice. 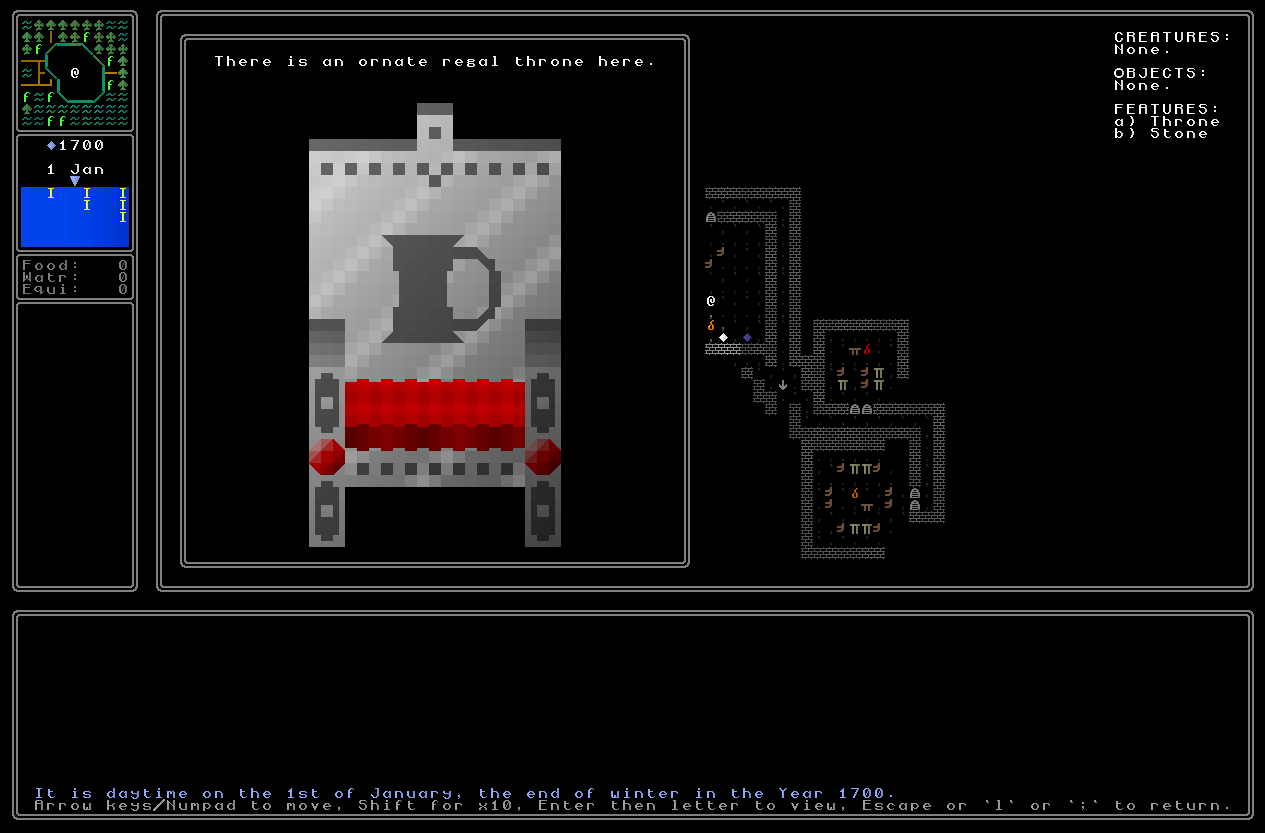 I’ve also completed a number of bug fixes, such as:

So: I’m pleased to say that 0.10 is now going to be a release focused on the stuff I couldn’t get into the last few releases, plus a load of new items, some new mechanics, plus a load of polishes and refinements and fixes for bugs and things of that sort. Again, I think it’s really important for me to settle into a regular annual release schedule of any size, rather than focusing on huge releases across any time period. I just don’t think after being pretty unwell for eight months that four months – even four months of focus – is simply enough to do credit to the book generation ideas I’ve started working on, and that I’m excited to deploy. With that said I’m sure I will be continuing to do a bit of work on book content generation, since that excites me and I’m incredibly keen on developing this system I’m building for this – which I think is distinct from others? – and seeing where it can go. However, my priority will be on this 0.10 content, building on 0.9, polishing, fixing, improving, developing, and fleshing out, what’s in the game right now. 0.11 might be book generation; it might even be combat; it might be some combination, or something else; but 0.10 is going to be a release of significant size, deepening both the gameplay interactions in the URR world, and the game world detail, and I’m excited to get working on it.

Thanks for reading everyone, and I’ll see you in a couple of weeks – I promise! – for the next update! 🙂