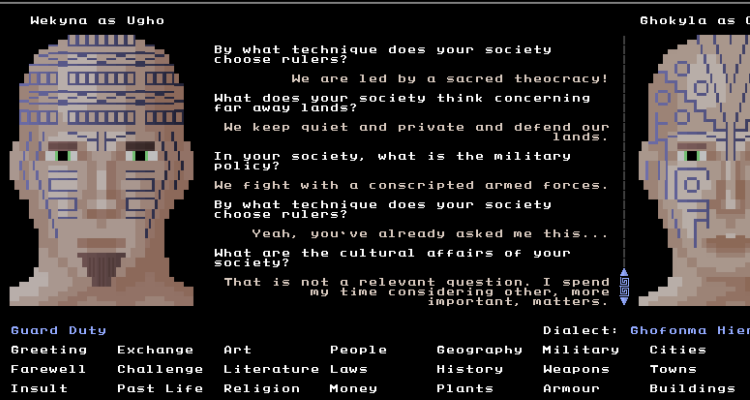 It is with immense pleasure that this month’s blog entry is going to be a long and pretty thorough update on what I’ve programmed into URR in the last little while. As many of you readers will know, the latest version – 0.8 – has been about 90% done for over a year, until I restarted development, slowly, a month or two ago. It is now sitting at somewhere around 95% or so, I would say, although I have also reduced the scope of the remaining 10%, so that I can just get it released as soon as possible – if there is a 0.9, I’ll return and fill in the blanks then with a much smaller release.

Nevertheless, here’s a rough log of the things I’ve done since resuming development, quietly, slowly, in the background:

Where does this leave us? Well, the conversation system is more complete than ever, and more bugs have been fixed. As before, I’m now not giving deadlines or anything, but the 0.8 version of this mad sprawling worldbuilder is finally on its way in the not-too-distant future. More soon!