For quite a while now there have been a number of terrain features in the game that do not possess proper look-up images. The three that have stood out have been paintings (in castles, galleries, private homes, etc), statues (in parks, districts, castles, galleries, etc), and thrones (in castles). Procedurally generating paintings and statues is – obviously – going to be a fairly complex process so I’ve been leaving that one for a while, but I decided that generating thrones was an appropriate and sufficiently finite / realistic goal for 0.9. I figured these wouldn’t need that many variations, since this is a rare item presently only appearing in castles (although I am debating adding “lesser thrones” to the houses of nobles and lords and whatnot, but I haven’t decided on that for sure just yet), and it would be a nice extra generator to throw in to the game alongside the main things for 0.9 (which I know I haven’t talked about in much detail yet, I’m just focused on getting 0.8.3 out first). Obviously I wanted to create something which looks ostentatious and grandiose, but also something which, as ever, had clear aesthetic or design connections to other parts of that civilization. Here’s what I came up with! 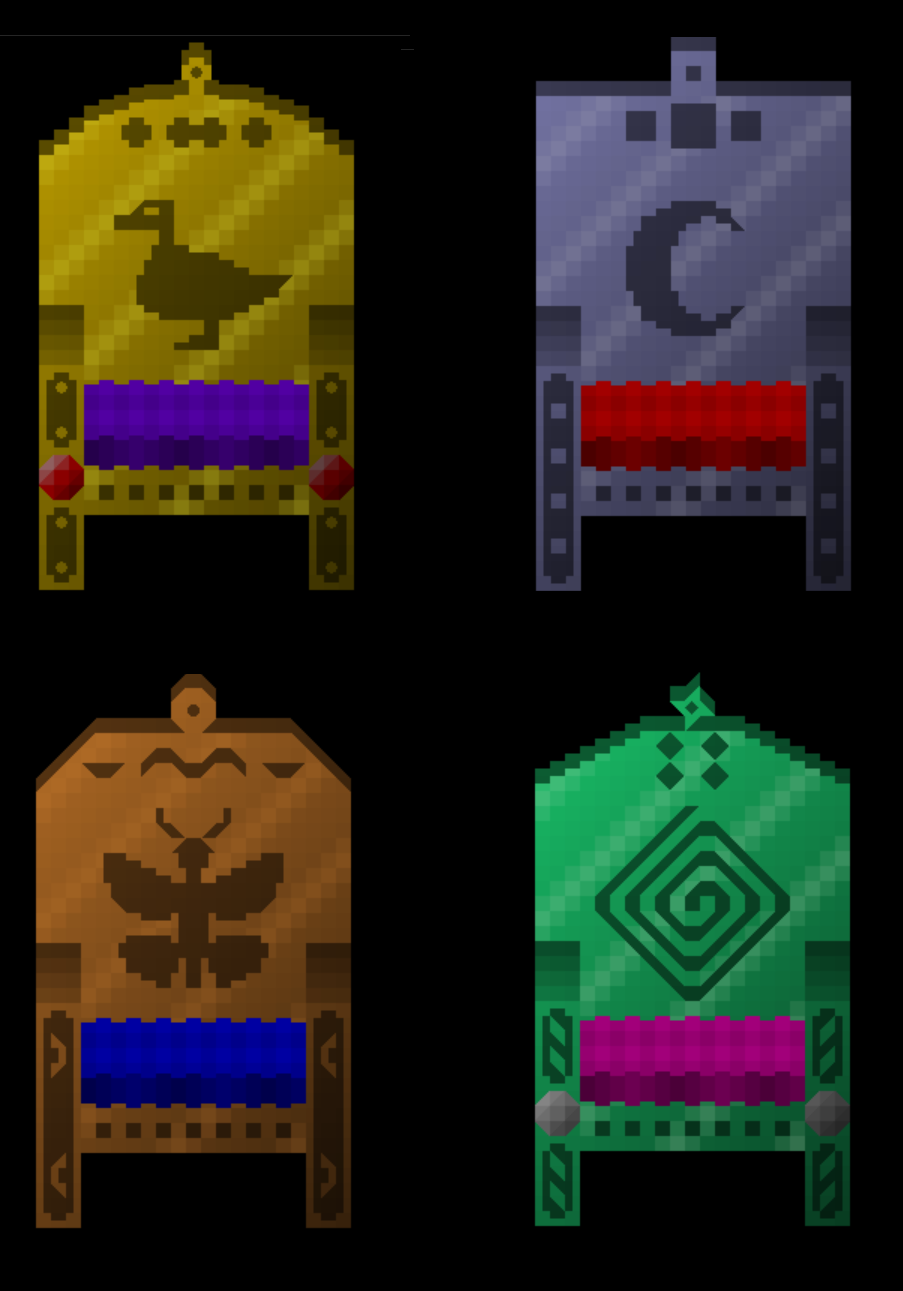 The upper shape of the throne and the pattern at the top of the throne, and down the arms, are of course contingent on the shape preference of that civ. The material will usually be gold, silver or platinum, but for rare civilizations it might be something more exotic like jade (in the bottom-left), or lapis lazuli, or ivory, and so forth. The seat/cushion then picks a nice bright regal colour, with a few possibilities disabled for certain throne colours because the colour combinations in question didn’t look quite right, and then the pattern on the back will reflect the coinage of that nation. As you’ll all have seen in a previous update 0.9 will be including procedural coin generation, and this seemed like a great place to build up some more visual unity (and so from this picture, of course, you will not that coins can also show a moth, a labyrinth, a duck, or the moon).

In turn, of course, a throne must have a name so that people can talk about it, the person who sits on it, etc. So, for instance, that first throne might be “The Glowing Chair of the Duck” or “The Auric Throne of the Ruby Duck” or “The Gold Seat of the Pond” or “The Gilded Duck Throne”, etc. The second throne (going clockwise) could be “The Platinum Chair of the Moon” or “The Lustrous Moon Throne” or “The Nocturnal Platinum Seat” or “The Silver-Blue Moon Chair”, etc. The third throne could be “The Jade Labyrinth Seat” or “The Winding Jade Chair” or “The Jade Throne of Confusion” (I like that one!) or “The Jade Throne of the Diamond Labyrinth”. The fourth throne might be “The Chestnut Moth Chair”, or “The Fluttering Bronze Throne”, or the “Burnished Moth Throne”, and so forth. You get the idea! Overall I’m really happy with this generator – it’s one that players will rarely see, but I like it for precisely that reason, and I hope it’ll offer something distinctive and interesting if / when a player does indeed encounter one of them. Do let me know what you think in the comments! (The throne generator might appear in 0.8.3, or I might leave it for 0.9, but either way it will appear in the game soon).

Lastly, 0.8.3 is still coming along nicely. I’m on quite a good “run” of URR motivation / focus at the moment, so I want to push that as far as I can go, so basically I’ll release 0.8.3 as soon as my mind moves onto other things. Until then I’ll just keep adding more stuff to it, so 0.8.3 might turn into a slightly larger release than previously anticipated. It already has a bunch of new content and a bunch of bug-fixes, but we’ll see how much more gets in there. More soon!