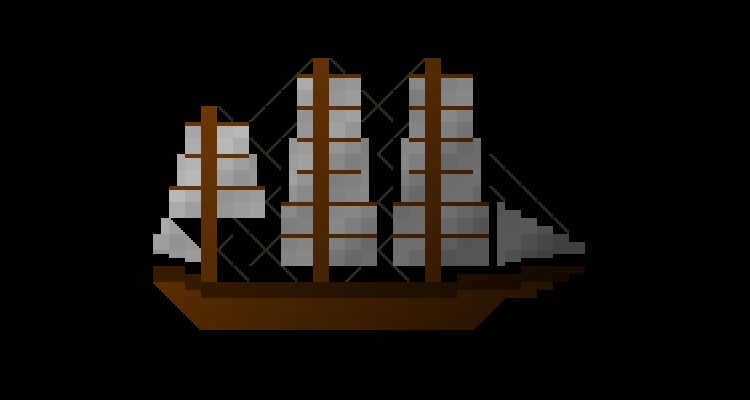 Some very exciting developments this week! Ships have been reworked for 0.9 and made about a hundred times more diverse, and more interesting, and have some actual gameplay around them now. So firstly, in 0.8 I created a system for establishing travel and trade routes that ships would use, as seen in the picture below (players would not see this directly in-game). The system was specifically designed so that whenever a new route matched up with an existing route, it would stop generating a new route, so that ships would travel exclusively on well-plied trade lines and so forth, which lead to something like this: 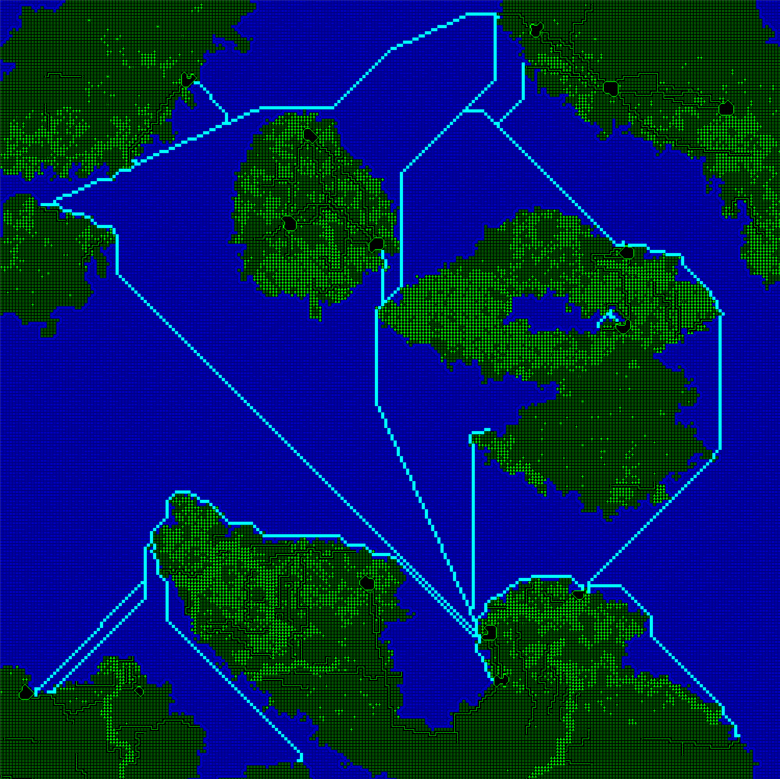 That was fine of course, especially as this was partly an under-the-hood thing that players didn’t perceive too strongly, and in 0.8 ships were free to travel on and simply served to help the player get from one part of the world to the next. Now, however, as we begin to implement mechanics around time, money, and travel, ships needed to be made a little more detailed. Firstly, of course, real-world ships in the sort of 1600s-to-1800s world URR exists in, did not all go with exact trade routes. You would get plenty of variation depending on winds, the seasons and the time of year, which way you were going, and of course sometimes ships travelling to and from similar directions might take different paths for political reasons or other causes. As such, I started by reworking this a little bit into a system that would still group ships in certain areas, but allow also for a diversity of paths to and from similar destinations. That yielded something like this: 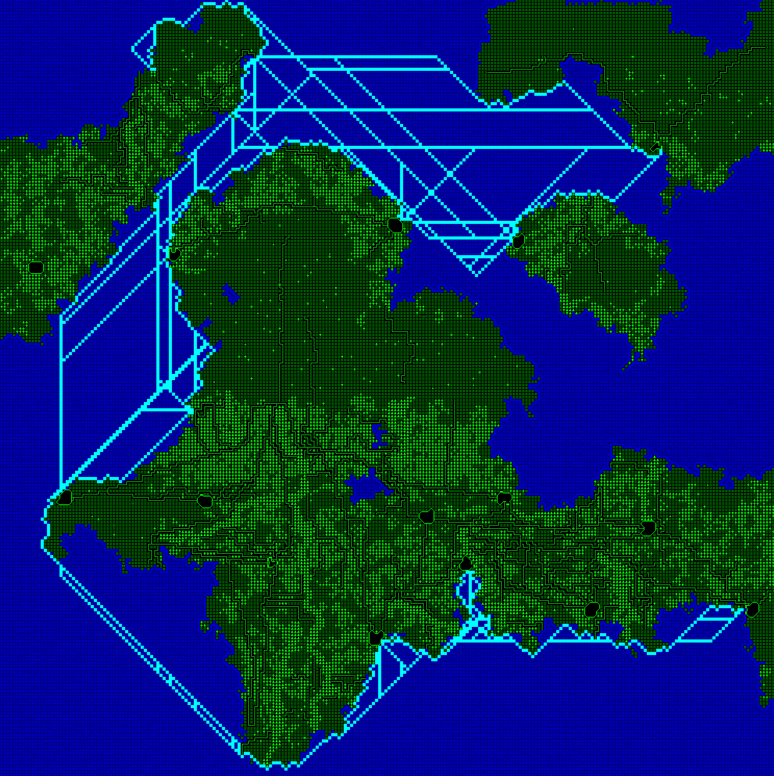 So you’ll see this looks a lot more organic and realistic – there are still clear, most optimal paths that many ships take (in the real world these would of course be shipping lanes, essentially) but there’s also a lot of variation from ship to ship, even those working in the same sorts of areas. I think this is great. Now, if we transform this into a heatmap showing us how many ships go along a certain path, where red = one, yellow = a few, green = several, blue = lots and violet = a massive number, we get this… 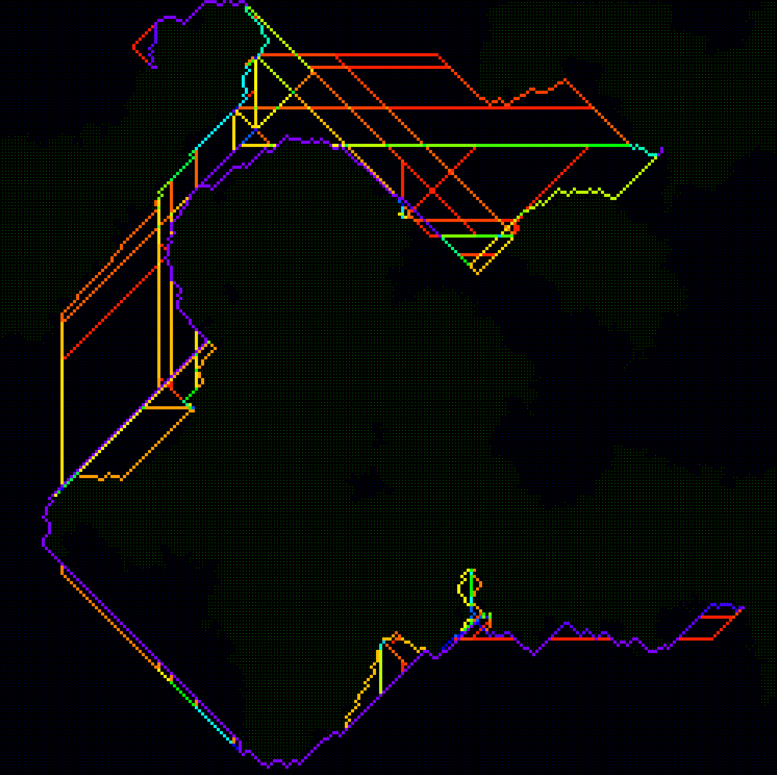 …which I am very happy with! Some obvious and busy shipping lanes, some less plied routes, and some in the middle. The next step was to generate the ships themselves, give them images, personalities, names, histories, crews, and so forth (and of course speeds and prices) and thus make the selection of ships and travel routes something to actually think about and weigh into your movement around the world, instead of something that takes place instantly and requires no real consideration. I set about building a ship name generator, and after a little while, you can see some of the debug outputs from this generator here, as well as their coordinates, and the length of their paths. Keep in mind the world map is 250×250 tiles, so < 25 is a short journey, < 75 a middling journey, anything > 75 a long journey, and anything over, say, 125 or so generally means you’re really going to the other side of the world. 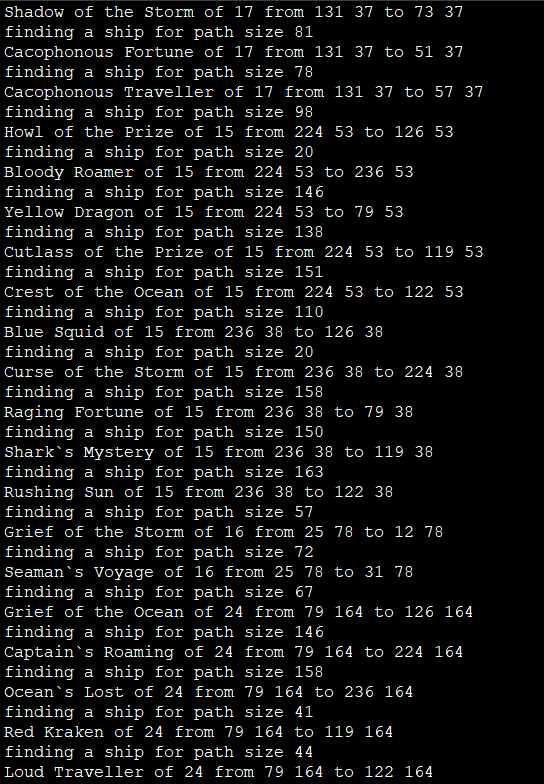 Would you sail on the “Red Kraken” or the “Grief of the Ocean”? I know I would! As part of this ships also now possess traits, some of which are active in this release and some of which will come soon in 0.10. Again, the goal here is to add more strategic depth to selecting which ships you go on, and I hope will actually get the player remembering and thinking about specific ships they’ve found to be especially useful: maybe a ship that goes between the two cities the player is spending much of their time in, or a ship that is especially fast or cheap, or a ship that gives a discount to a particular demographic the player is in, or a ship that is well-armed and helps the player travel through regions of piracy (coming later…), and so forth. Here’s the current list (you might need to open the image in another tab, depending on how you view this website), and their effects:

The availability of these traits is of course determined by the policies and other traits of a civilization, so for instance only a civ with the “Literary” trait can have the “Poetic Ship” possibility, only one with the “Theocracy” trait can have the “Holy Ship” possibility, and so forth. There are some really interesting combinations which should yield interesting strategic choices. You can see these when you go into a dock in a city or a town and look over the available ships. Whereas in 0.8 you just had a list of destinations and clicked on the one you wanted, the ship selection screen has now been massively overhauled! You can see the list of destinations and what ship will take you there; text (white if you can afford it, red if you can’t) showing you the price of passage, where the ship is now, and how long it will take you to reach that destination; who owns that ship, where it travels from, and so, and so forth; an image of the ship (procedurally-generated, naturally!); and a list of the ship’s traits, which are colour-coded depending on what they apply to (e.g. religion, armament, cost, ship-board culture, and so forth). In terms of ship traits I estimate there are around 150,000 possible ships that can generate with different combinations of traits, and I think that should keep things interesting for some time! 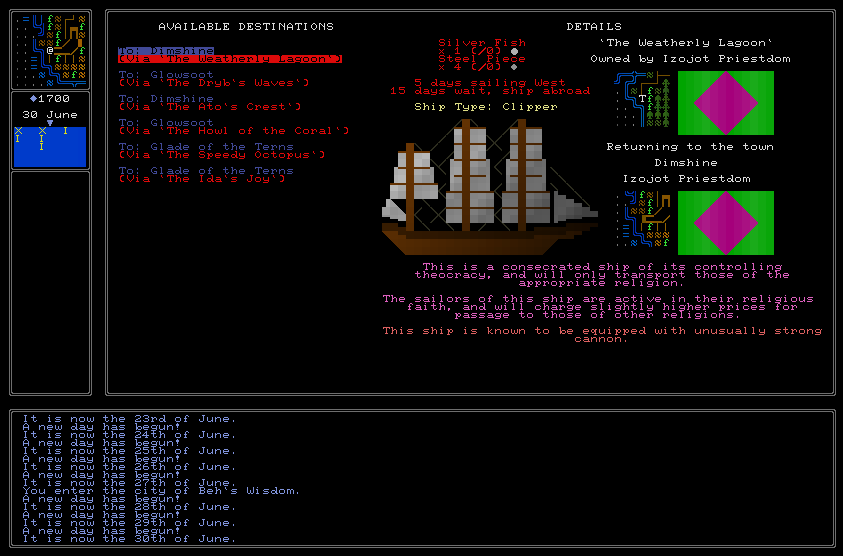 In docks, as elsewhere, you can now enter currency exchanges where you are able to switch currencies you possess for currencies you do not. Each dock will only accept the currency of its home nation for travel (though maybe I’ll change this later and have some cultural trait, e.g. “Internationalism”, allow you to spend any currency in that port?) and so one of the strategic elements of the game will come from building up stores of required currencies, and planning ahead. Whenever you trade currency you lose a little bit of overall value from the currency you are trading out of (as in the real world) and so you’ll want to exchange currencies rarely and in large volumes (again, as in the real world). Again, I’m sure I will add traits later on for slightly better or slightly worse exchange rates, and other things of this sort. 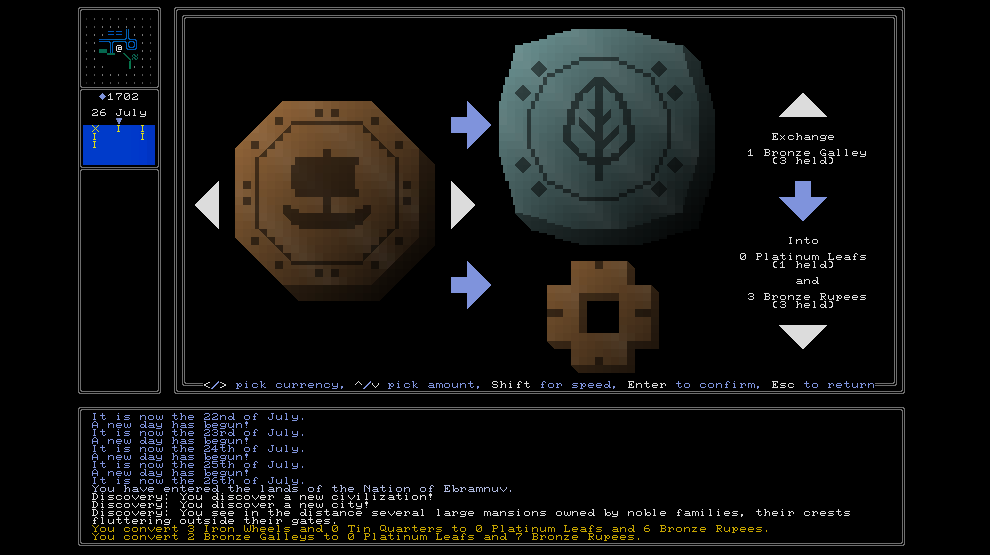 Once you’ve got your money (this next screenshot is obviously from a different world / port), some of your travel options will show up as white rather than red: 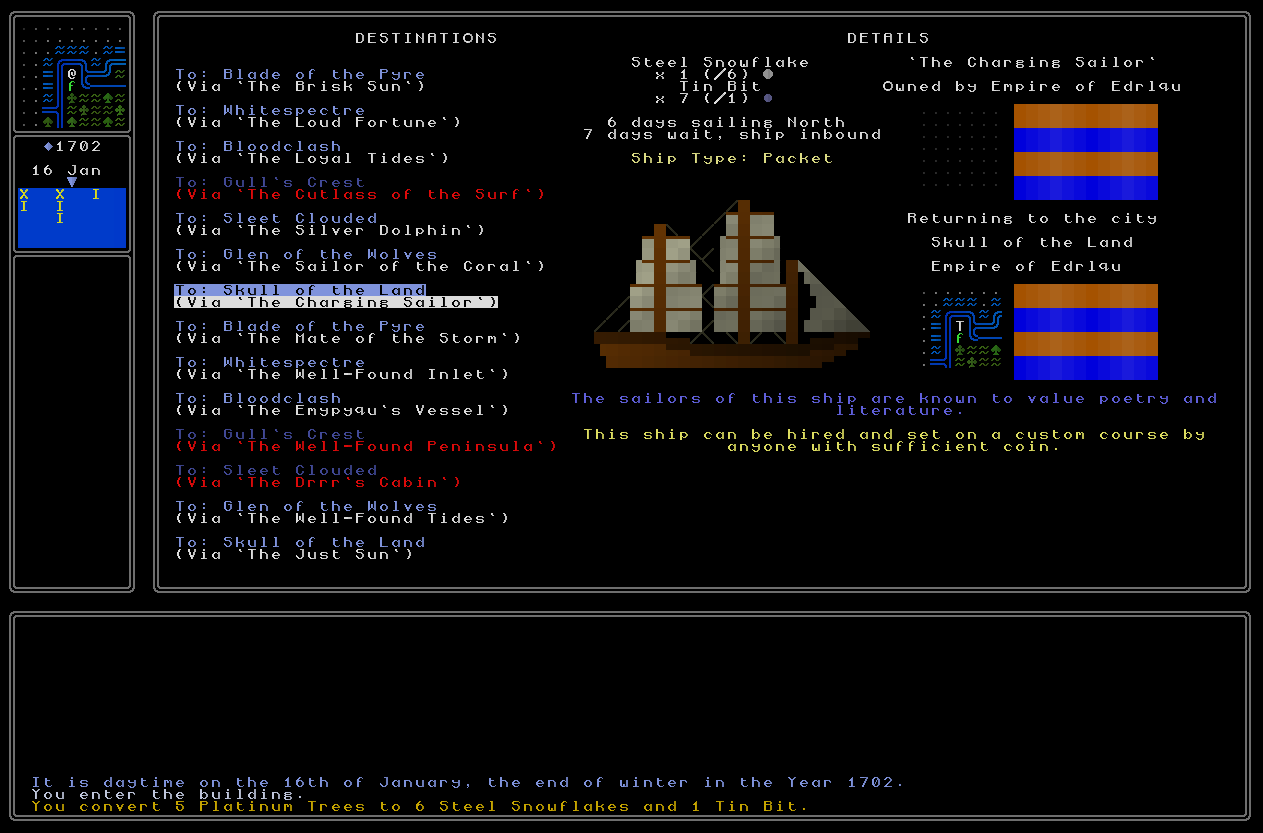 And then you select your ship and the game gives you a final confirmation you want to spend that money. 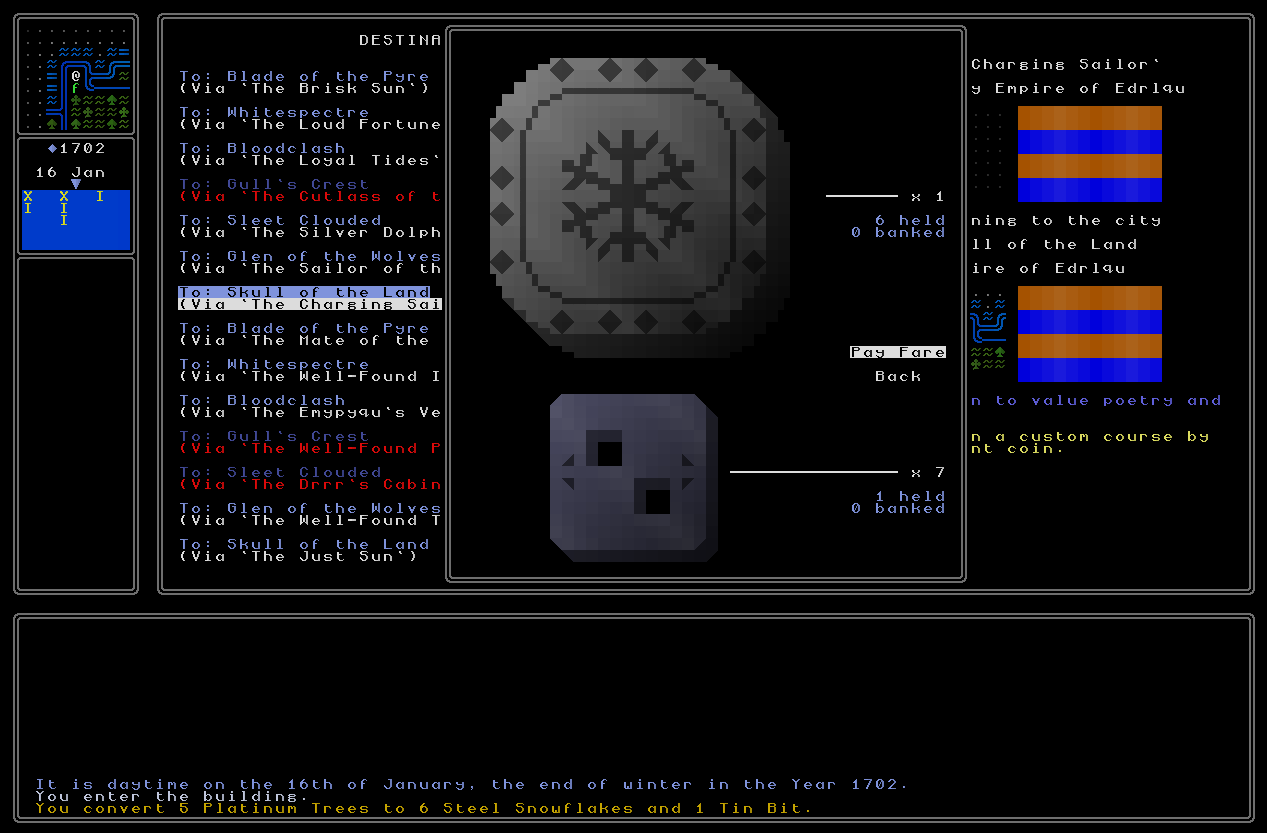 Once you say yes, you are given a little story about your time on the ship (as in 0.8) and you are ferried to your new location. 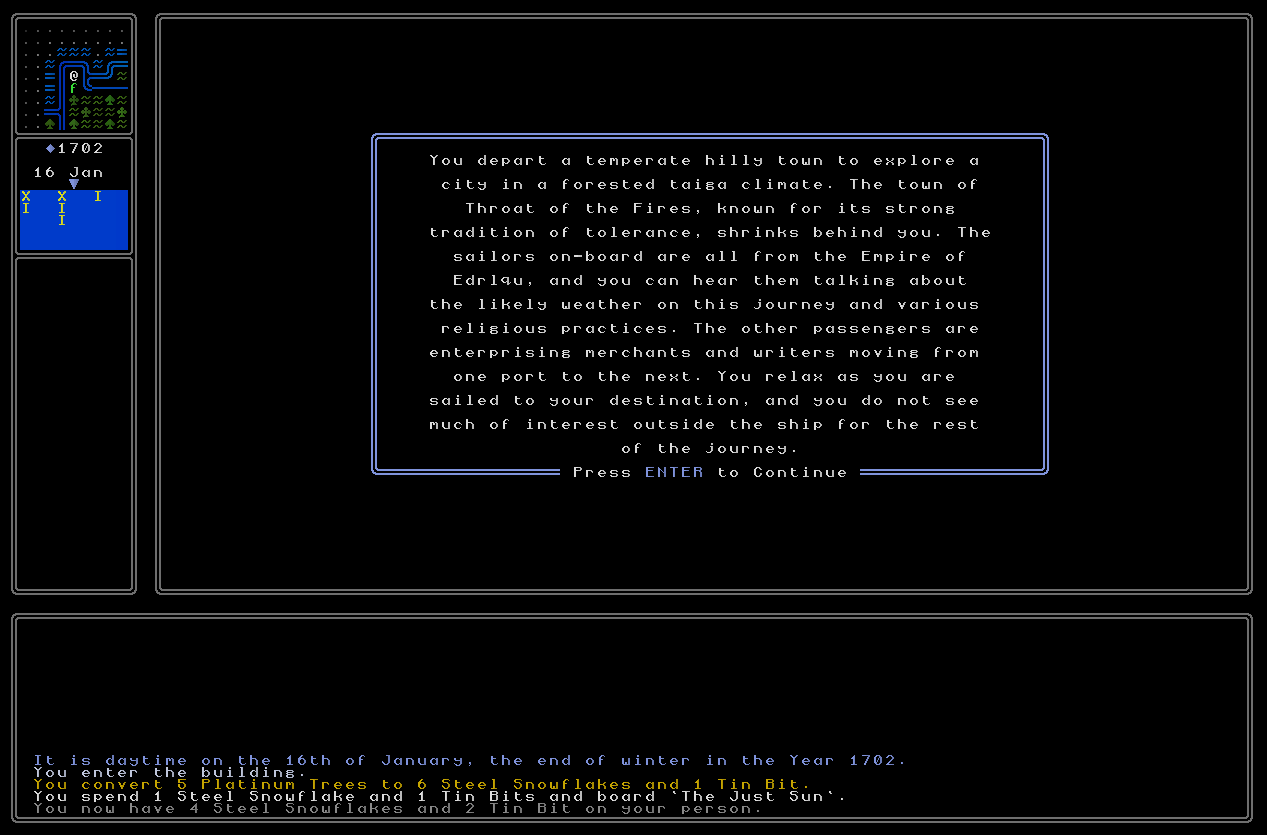 I have more to write about this later, but I have made massive optimisations to the speed of the game in 0.9, and thus travel no longer takes many seconds for the game to calculate, it is instead now (effectively) instant, as is travelling on the world map! But more about this at a later date. This was an update about ships and docks and currencies, and I hope you all enjoyed it. See you all soon for another update for what should be a (31st of) December 2021 release!