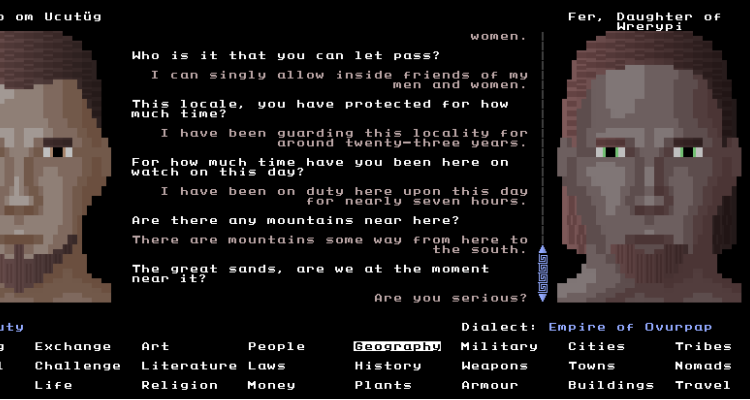 Here’s June’s big update. The bugs and fixes continue to get smaller and smaller with each passing fix, and they’re generally taking less time, being more and more obscure, and often involving text or grammar for sentence generation rather than things which actually cause the game to crash. With that said, some new crash bugs around pathfinding have arisen, but – see below – I think they are now all fixed, and hopefully no more will appear as bug-fixing and tweaking continues. Without further ado:

At this point there are only two “major”(ish) bugs I haven’t fixed: one involving multiple ambassadors trying to sleep in the same bed (although one imagines this would do wonders for diplomacy), and one involving mints still crashing if you go back into them later. These both seem to be fairly big tasks, but I aim to tackle them in the coming days; I believe the former will be easier to deal with than the latter, but we’ll see how it goes.

So, that’s everything for this month. The rest of June is pretty clear at this end, aside from one academic paper I need to finish writing (about Super Mario Maker: this has become a rather exciting side project I’ve been working on for a couple of months now, particularly focused on troll and “kaizo” levels and the communities of players who both design and play these monstrosities / masterpieces). At this point, however, I’m really trying to push URR 0.8 out. There’s so little left to do now, so little left to check: of course I’m going to miss some bugs, and I fear, maybe even a couple of crash bugs, but I’m doing my absolute utmost to make this as stable, complete, and finished a product as I possibly can. Next update hopefully soon!