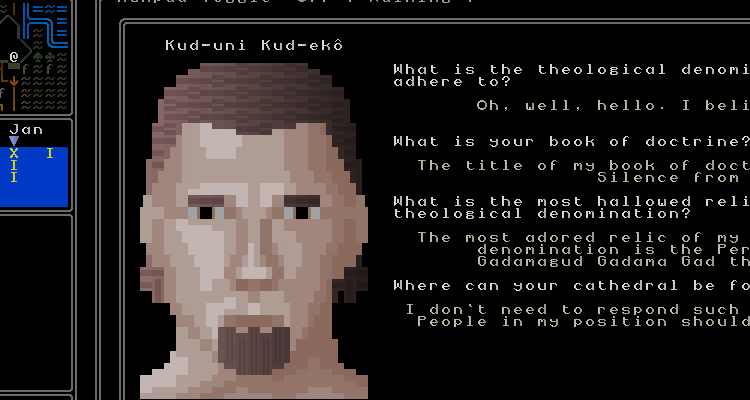 Hello, my friends! I apologise for no February update, the COVID situation threw everything into disarray on the teaching front and it took most of February to get on-board with “online delivery” of teaching content (this being a common experience of many academics at the moment). But here’s the update I was hoping to post in February had a global pandemic not emerged. My head is inching closer and closer to full recovery; getting fewer strange head symptoms, getting them less often, and definitely generally able to do more and more screenwork as time goes by. I believe I’ve been working on URR again now for almost a year after my year or so hiatus, which is longer than I hoped it would take to finish things off, but I’m so happy with the so-close-to-final result I see before me now. Without further ado, here’s what I’ve got done recently:

– Several new bugs which arose through the implementation of docks have been fixed – for example, when you travel from a city to a town and then directly on again, the game no longer sometimes crashes depending on your movement options before arriving at that town.
– Equally, going town to town and then moving out of that town also no longer sometimes produces a crash.
– There was also an issue involving generating docks on certain terrain types, especially on the poles, due to the presence of ice confusing the algorithm and leaving it unsure whether the ice should count towards the number of ocean tiles the dock touches, or the number of land tiles, or both. This has now been resolved.
– NPCs who belonged to nations without explicit nation-wide religious affiliations were sometimes unable to speak intelligently about their religious beliefs, and this has now been fixed; NPCs in nations that espouse religious freedom can now comment on any religion appropriate to them, while NPCs in nomadic civilizations will also give appropriate answers.
– Some weird remaining bugs with NPCs dithering about and not knowing what to do when they reach a doorway between city districts appears to have been fixed.
– Weird grammatical issues that would sometimes arise in giving lists of responses to the player are resolved.
– Related to the above, the list-giving ability of NPCs has been reduced and tone down to prevent the player from getting a gigantic two-hundred-word response to what would ordinarily be a rather trivial line of questioning.
– There is no longer a rather rare bug when entering certain kinds of houses in middle-class districts which had, previously, either caused the game to crash or caused a lot of strange effects like chairs being generated in ceilings and so forth (although perhaps this was simply the procedurally-generated home decor choices of the civilisation, and I shouldn’t have intervened?)
– Fixed an issue with using docks sometimes not correctly putting NPCs into buildings to keep track of them later, and then looking at the new place you move to in the hope of finding them there instead, which crashes the game.
– Fixed an issue where the game sometimes counted all places for a dock it tried and found unsuccessful as potential dock doors the player could emerge from after travelling across the ocean, meaning that it sometimes took a long time for the game to randomly cycle through all the nonexistent dock doors until finding the real one; this no longer happens.
– Traveling in certain dock-esque ways no longer causes parts of the UI to sometimes disappear (this was hard to spot, but once I’d seen it, I couldn’t let it stay in).
– Resolved another issue where continual use of the dock system without ever leaving the dock system to explore a town, city or neighbourhood would lead to the game crashing because it could no longer calculate the length of time the player’s movements should have needed.
–  I found an unexpected issue where certain towns were unable to spawn all their buildings correctly, causing the game to crash when trying to find doors for all the relevant NPCs; I think this has been fixed, but I’ll continue investigating.
– Monasteries had stopped spawning due to an error in the algorithm that decided where and when they should be placed; this has been fixed, and monasteries appear again.
– A few remaining buildings that exhibited strange behaviour when you entered in day time then returned at night, or vice versa, such as monasteries, guilds, arenas and jails, have all been polished and these bugs should no longer occur.
– Entering a district properly now gives you information on its contents for when you subsequently travel outside (I think I mentioned this before, but it turned out to not be fully implemented; it now is).
– Abbots now tell you they are the abbot when you talk to them, instead of saying “Oh, I’m sure the abbot is around here somewhere…” before wandering off. NPCs are not supposed to troll the player.
– Towns that contain only a corner of ocean now spawn docks correctly instead of getting stuck trying to find a nice wide piece of sea in which to place them.
– Very rarely changing version or moving around save files would cause some slightly weird things to occur on the Load Game screen, but this has now all been fixed.
– Resolved a handful of strange issues with objects not appearing correctly on certain kinds of floors, especially in wealthier buildings. 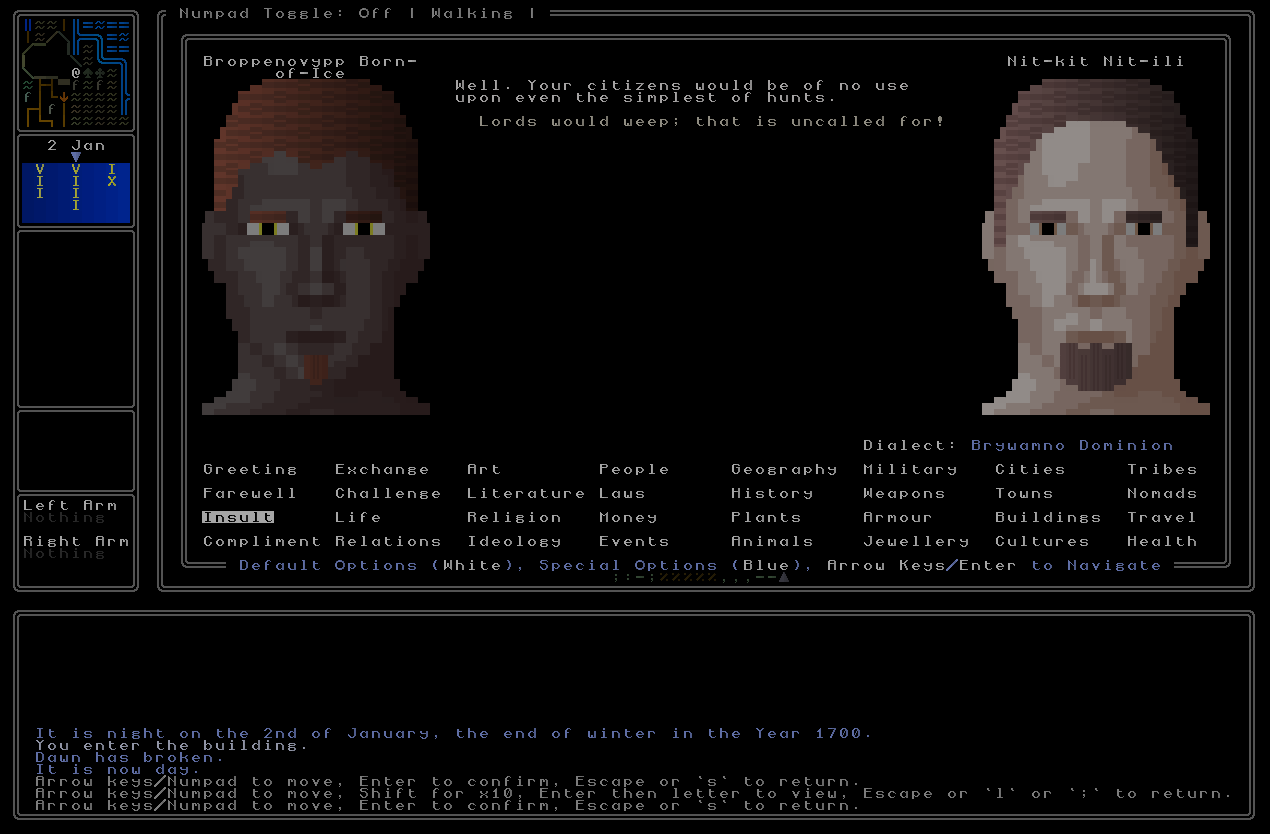 Thank you all, again, so much, for sticking with me for so long on this. I don’t know where URR will go from here and whether or not this will be the final version, but 0.8 has really turned into something I’m deeply proud of, and something I can’t wait to share with you all. 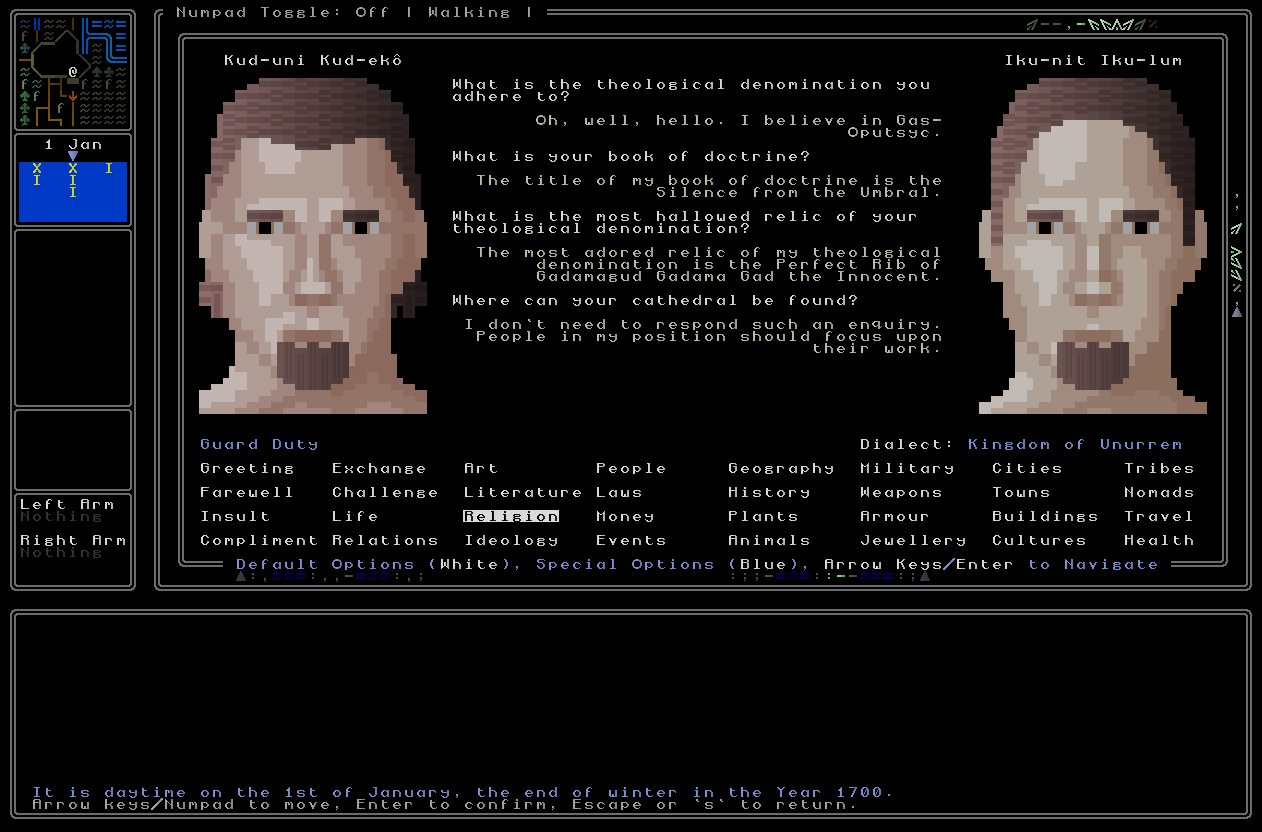