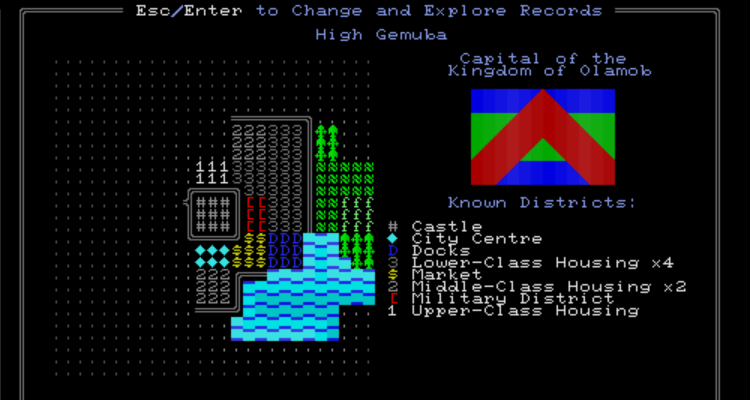 As well as the above though, I have actually added several new things for 0.8.1! Specifically:

I am very confident this new ^ stuff has not introduced any bugs, since it does not intersect with any existing systems at all beyond just the world map and the encyclopedia, and no system is dependent on it – …but if you fancy giving it a test I wouldn’t object :). This was all stuff I wanted in 0.8 but my desire to get the game out rather than putting in every last thing I had planned took priority (and I think rightly so), but with another month and a bit it has been satisfying to work these elements back into the game world.

Finally, I must acknowledge a tiny handful of bugs I have been unable to reproduce. One issue with using fast-travel around a city leading to a crash; one issue with a crash in a slum when following an NPC around; and one issue with an empty castle which didn’t seem to contain anyone; are unfortunately not addressed because I simply cannot find the issues in question. Similarly a bug with slightly asymmetrical vision cones for different directions the player might be facing has, also, proven incredibly elusive; I understand the cause but I have been simply unable to find the right mathematics with which to fix it. However, given how extremely rare these are (only one person reported each) and given that I might have fixed the problems anyway via resolving some of the above bugs (and the vision cone issue is very minor), means that I think now is the right time to go ahead with releasing 0.8.1. Nevertheless, please do report crash bugs or any other bugs (aside from weird language when talking to people) if you still find them in the new version, and I will be sure to keep an eye out for them as well.