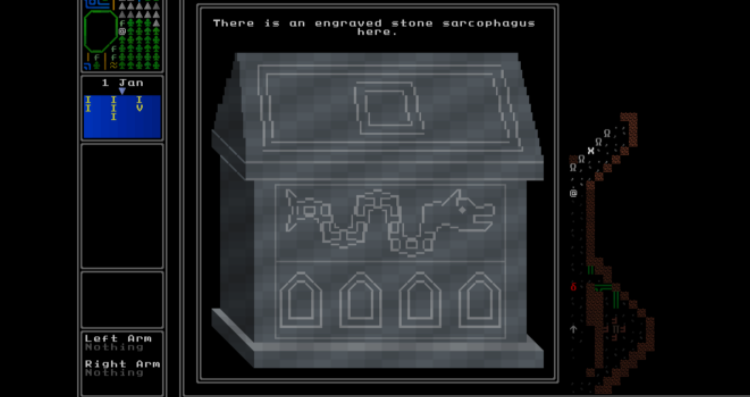 Fixed an extremely rare bug where a slum was supposed to spawn, but could not, due to the surrounding environment of a city (and thus the game got stuck in an infinite loop trying to find somewhere to put it).

Hugely reduced the risk of people getting jammed on stairs in buildings with a large number of individuals regularly moving around (e.g. servants or slaves in mansions) – this is however still possible, but a larger fix will have to wait and this fix will have reduced the chance to it to almost 0 anyway.

Leaving the policies window now correctly redraws whatever was underneath before you started looking at it.

Fixed an issue with monastery generation sometimes resulting in a crash.

Corrected a graphical error in clothing generation, resulting in shading being barely applied at all to many items, particularly boots (this was another one that emerged from the Python 2 -> Python 3 conversion).

Fixed a crash bug involving guards who should be moving into another district instead getting stuck at the gate and not knowing what they should be doing.

Asking an innkeeper in a town about their job (and therefore the name of their tavern) no longer results in a crash, because apparently up to now the taverns in towns were not actually generating names…!

Fixed a bug with displaying possible cities / towns in the dockyard menu very rarely to showing them correctly, mixing colours, or omitting a part of the location’s name.

Looking at ordinary doors in castle dungeons no longer causes a crash.

Sorted out a crash bug in castle generation where a certain kind of room couldn’t find anything to spawn, and got stuck in an infinite loop.

Tropical, marsh or desert trees no longer get a description of being “covered in snow” in winter – when they demonstrably are not – and no longer have barren branches when you examine them closely.

Entering a tile on the edge of the map can no longer sometimes cause a crash (as a result of the game trying to check the surrounding map tiles in order to get a better sense of your location).

Fixed a bug where priests in churches would sometimes tell you they belonged to a religion which they, in fact, did not have any interest in.

People in embassies no longer say they have your religion instead of their religion.

Key inputs are now no longer buffered up to a potentially infinite amount, and stop buffering as soon as you let go of a key. This was a particularly hard and frustrating bug to fix, and for some reason I feel obliged to mention that here – this took days to fully resolve and was profoundly unpleasant, but I think the problem is now completely taken care of.

Roads in castle districts can no longer be made into walls, allowing you to climb up to the top of the walls and thus generate all kinds of mischief.

The player’s house is now always correctly mentioned in the player’s lookup information; I have also removed the family trees, as those don’t do anything right now and continued development will necessitate a reworking of that element.

Using a dock to enter a city, and then trying to go straight back into that dock, no longer requires two “Enter” presses instead of just the one it should.

Fixed a rare bug where roughly 1/300 religious buildings were larger on the inside than on the outside (no doubt appropriate to a very different sort of game, but probably not correct here).

Stopped altars of a particular kind randomly re-generating themselves whenever you look at them! (Very spooky.)

Fixed a bug where towns in icy areas sometimes failed to generate correctly, causing a crash due to uncertainty over what terrain to use.

Torturers are now correctly identified in the NPC list in the guidebook.

Pressing “Enter” when looking at something else, when there is also a person on that tile, no longer immediately takes you back to looking at them / their clothing.

Clerks no longer all say they work in the same place.

Monks are no longer sometimes asleep on beds when you later return to a monastery you previously explored, and at least one night has passed (but you go back in the day time).

The “when were you arrested?” question and the “how long have you done this job?” question for prisoners do not now give different responses, and asking the latter will elicit a snarky response.

Fixed a bug where asking an NPC about local plants resulted in a crash.

Resolved a rare crash bug where asking someone about certain policies of their civilization in some very particular circumstances caused the game to be unable to figure out the policy in question.

Fixed a crash bug when you looked at open doors inside religious buildings (this definitely happened in a church in the middle of a monastery courtyard, I’m sure not whether it happened elsewhere as well, but either way, it has been fixed).

Fixed a few minor graphical issues in clothing generation introduced by the Python 2 -> Python 3 conversion, and which are hard to spot, but would always offend me if I didn’t put them back how they were meant to be.

The resources map – which has not worked properly in a long time – has been removed, leaving the “Terrain”, “Territory” and “Height” map options. All the information it was supposed to show can now simply be seen on the terrain map by looking at the colours / information on mines (see below).

Fixed (I think?) a bug involving NPC pathfinding and civilizations that accept slavery.

Fixed a rather intriguing visual bug where for certain NPCs, having a certain kind of scarification would also make it look like they had pearl earrings – I suspect this is not the aesthetic they were going for.

Fixed a bug involving slaves in castles not being able to correctly find their way out of certain floors if they decide to go and address something on a different level.

Dealt with a crash bug that could occur when trying to generate the story that shows up when you take a ship between two ports.

Purged a crash bug which could occur when looking at a particular kind of door in a hunter-gatherer civilization.

Also fixed a number of concerning graphical issues with various structures and items in hunter-gatherer civs, again generated by the Python 2 -> Python 3 transition.

Fixed an unfortunate case where people in nomadic civs and hunter-gatherer civs did not always spawn with the appropriate items of clothing. (Actually I believe they did but the game just wasn’t registering their presence? I’m not sure, but either way, this is resolved.)

Hunter-gatherer shrines, for the time being, now do not spawn, so as to remove a bug involving their generation (they may well return later once I figure out some actual use for them).

Jailers can now always successfully tell you how many prisoners they have in their prison without helpfully crashing the game at the same time.

Resolved (I think?) a crash bug with wandering city NPCs getting pushed off roads and not being able to find their way back onto their intended path.

Fixed a typo in the saving screen.

The guidebook has been updated to address numerous out-of-date statements.

Fixed yet another way that asking people what nations their nation trades with could cause a crash – this really, really should be sorted now.

Farms no longer spawn orchards or plants that don’t make sense for the biome; so for instance in tundra you’ll only see things like barley and oats, in desert you’ll only see things like corn and grapes, in temperate regions you’ll see most plants, and so on. Farms can now also no longer spawn in marshland (this might be changed later) or on ice / snow biomes, but they can still appear in tundra, albeit with a limited selection of plants.

Similar to the above, monasteries in harsher terrains also now only grow appropriate plants / vegetables / etc, and monasteries in the polar regions do not grow anything themselves.

Policies have undergone significant shifts. A number of intellectual and cultural policies have been moved around and changed for various reasons, and we now see several new policies, such as “Linguistic” as an intellectual policy (linguists spawn in markets), “Scholarly” as an intellectual policy (universities will one day soon spawn!), and “Populism” (biographers spawn in markets) and “Contemplation” (philosophers, or rather shops selling philosophy books, spawn in markets) as cultural policies. Philosophy shops have a new shop sign, and “Linguistic” has a new policy picture in the menu and the in-game lookup.

There are also other new shops! Weaver (textiles), potter (pottery), pepperer (this is a real if archaic term for someone who sells spices), whaler (whalebone, ambergris, whale oil, etc), carpenter (wooden goods), brewer (alcohol, obviously), and watchmaker (timepieces). All have some lovely shop signs denoting something appropriate to what they sell.

Graveyards now generate again outside appropriate cities and in appropriate towns (those in a civilization with the “Monarchy” policy).

Crypts are now once more present and function correctly both beneath cathedrals (in a theocratic nation) and in graveyards outside cities (in a monarchic nation).

Resource generation has been completely reworked. Each civilization is now guaranteed to contain a mine relevant to its coinage if required (so platinum or jade coins require mines, whereas ivory or terracotta coins do not), and a small number of civilizations will also contain mines for gems or other resources, while others are able to access spices (cinnamon, nutmeg, etc) or ocean resources (like whale oil or ambergris). You can see mines on the world map, but they cannot yet be entered. Mines show on the normal map in various appropriate colours (so a jade mine is green, etc). Farms are also now light green on the world map.

A number of things which are definitely, totally not laying the groundwork for 0.9, have been secretly implemented.

(And as ever, if you find a bug – except weird speech from an NPC, which I am aware of sometimes being the case – please report it either here in the comments, or using the “Contact” form on the sidebar to the left. Thanks!) 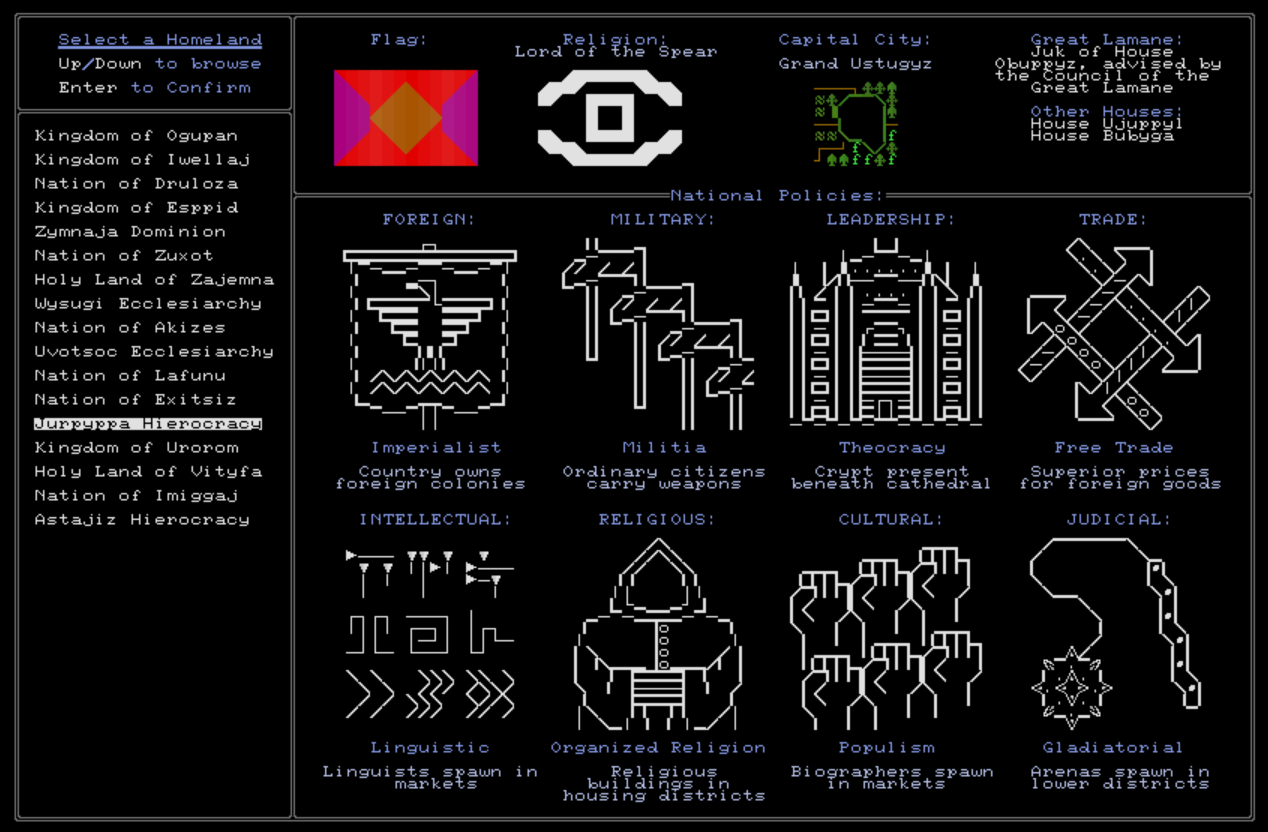