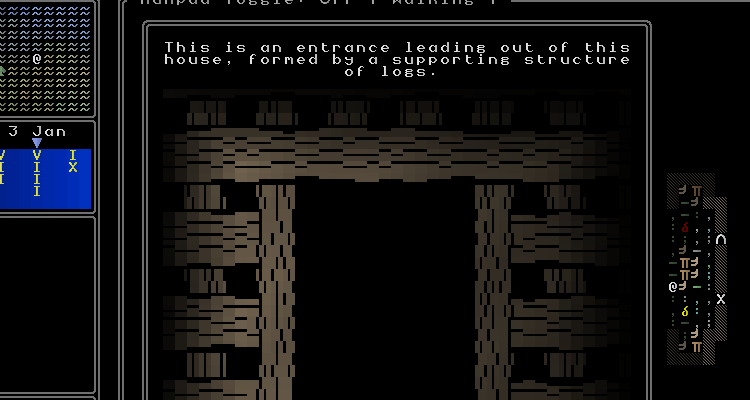 Lots more bug-fixes this week, and I now cannot find a crash bug anywhere! I’ve spent many, many hours this week doing everything I can think of doing within the game world, and it has been a long time now since I’ve run into a bug from talking to people, moving around, looking at things, saving/loading areas, generating the world, etc. This means a bunch more bugs have been fixed. Specifically:

It turns out the Windows 10 fix I thought I’d found… is only working on my Win 10 system. I’ve sent it to a few people with Win 10 computers (some of whom even have Python installed) and none of them can get it working. This must have something to do with some stuff that needs to be packaged with the download not being packaged with the download; this is a real pain as there’s no obvious error log which tells me what’s missing.

So it seems this is what it comes down to – the final hurdle. Let me stress at this point how far we’ve come in this last month or so: as of today’s update, I am calling 0.8 done! Everything works and nothing crashes. I just need to figure out what the problem is preventing the executable – which works completely fine on my Win 10 laptop – from consistently booting up on Windows 10 machines. I’m going to try a bunch of other bundling options with some other files included in the package which I wasn’t previously putting in there, and then if that doesn’t work, I’ll shift from py2exe to PyInstaller and try that instead (since apparently PyInstaller is better with 2.7?), but I do find these technical / hardware elements of programming very challenging compared to the actual game development stuff.

I’ll get onto this in the next week, and hopefully this’ll fix the issue – but I don’t know how challenging a problem this is going to be. This next week is also likely to be a very busy one for me in evenings as well as in the day, as a major grant deadline is coming up I have to prioritise – but I promised weekly updates until release, and you’ll see another update next weekend no matter what. So: more soon!